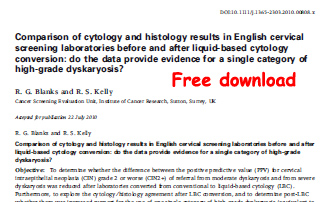 Using national data from the UK Cancer Screening Evaluation Unit, Blanks and Kelly show that positive predictive value (for an outcome of CIN2 and CIN3) of moderate and severe dyskaryosis was significantly different before and after conversion to LBC, but rather more so since conversion as cytology-histology correlation seems to have improved. They argue cogently for retaining two categories of high-grade dyskaryosis.

Comparison of cytology and histology results in English cervical screening laboratories before and after liquid-based cytology conversion: do the data provide evidence for a single category of high-grade dyskaryosis? (pages 368–373)