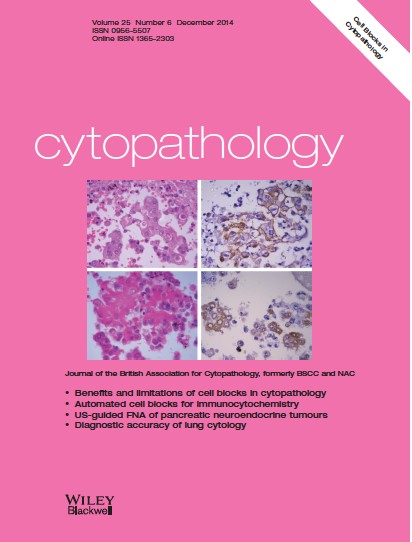 The article selected as Editor’s Choice for free access during December and January is a comprehensive review by Jain et al.describing the various types of cell blocks available and the effects of different fixatives on immunocytochemistry and molecular analysis. While emphasing the immense value of cell blocks they make the point that they are not a substitute for conventional cytological prepartions, which point is taken up in an editorial. Several other articles and letters on cell blocks are also published in this issue: Prendeville et al., Kruger et al. present studies of the Cellient™ cell block system while Henwood and Charlton warn against cellular contaminants in a certain form of thrombin used to make cell blocks.

Cell blocks in cytopathology: a review of preparatory methods, utility in diagnosis and role in ancillary studiesD. Jain, S.R. Mathur and V.K. Iyer.Cytopathology 2014, 25(6).

Cell blocks are not a substitute for cytology: why pathologists should understand cytopathology particularly in their chosen specialityA. Herbert. Cytopathology 2014, 25(6).