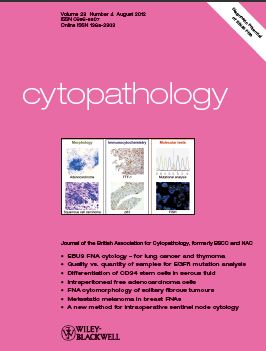 A review of endobronchial ultrasound-guided fine needle aspiration cytology by Fassina et al. is selected as Editor’s choice for free access during August and September.  The authors draw attention to the importance of pre-analytical assessment combined with cytomorphology in the selection of ancillary tests for diagnosis and targeted therapy of lung cancer.  Using the same methodology, Moonim et al. were able to type as well as diagnose a small series of thymomas.  Pang et al. show that FNA cell blocks and small biopsies are equally likely to provide sufficient material for EGFR mutation analysis while the quality of DNA extraction may be better with cytological preparations.