Another very successful and well received tutorial.
Also this year, the EFCS organized a tutorial of cytopathology, which took place in Bruxelles, at Université catholique. Forty-two participants (cytotechnologists, residents and pathologists) coming from 15 different countries (Belgium, Canada, Cyprus, Croatia, France, Israel, Italy, Latvia, Luxemburg, Netherlands, Norway, Romania, Russian Federation, South Africa, United Kingdom) took part in the courses, joining the friendly and informal atmosphere that characterizes the tutorials of the EFCS nowadays. I believe this is well synthetized by an email I received from a Croatian pathologist: “it was an amazing experience in professional and every other sense! Very useful and comprehensive, with excellent teachers, and I am so glad that I have been there and met such nice people”.

This excellent result was reached thanks to the competence and commitment of all tutors, to whom our thanks go. They came from Belgium, Italy, Portugal, Spain, Sweden, Switzerland and United Kingdom.
Twenty-eight percent of the participants had attended a previous tutorial and were so satisfied that they decided to come again (one participant coming from Romania told me that she attended the tutorials for seven times!). Approximately half of the attendants knew about this tutorial thanks to the EFCS website and others had this information through personal recommendation, but only three people declared that they knew from their National Cytology Societies. I think that in the future National Societies should try to make an effort in publicizing cultural and formative activities of the EFCS among their members.
The tutorial followed the established programme, with microscope slide-based workshops and lectures. The non-gynaecological cytology took part in the first 3 days, covering technical aspects, urine, breast, liver and biliary tract, lymph nodes, salivary glands, respiratory tract, thyroid and serous effusions. Gynaecological cytology was presented in the last 1.5 days, with slides of both conventional and liquid based cytology in all the presented topics. As usual, the Eurocytology teaching website was also presented. As previously requested by the participants, slide seminars showing few interesting and peculiar cases followed the workshops. These were much appreciated, as well as the practical part, testifying that our attendants like slides and look-alikes rather than theory. 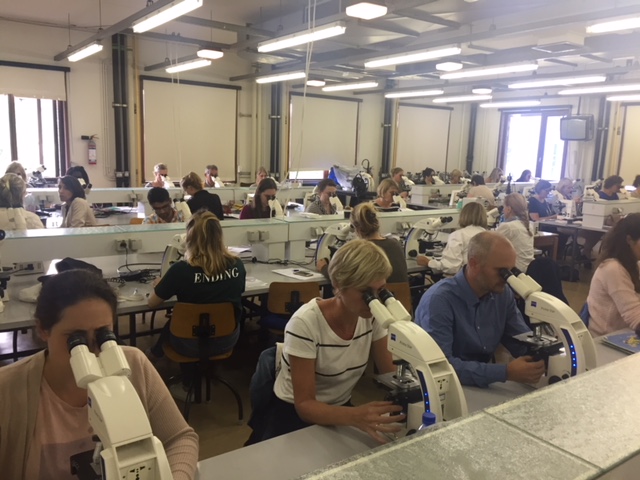 As in the previous editions, on the first evening, there was a welcome cocktail offered by the EFCS to all attendants and tutors. On Wednesday evening, they enjoyed a short visit to the centre of Bruxelles, followed by a dinner in a very characteristic restaurant, thanks to the nice organization by the Belgian Society of Cytology and personally to Birgit Weynand.
All candidates submitted evaluation sheets on receiving their certificates of attendance. Lectures, workshops and slide seminars, as well as the whole organization of the event, could be scored as excellent (1), average (2), weak (3) or inadequate (4).
All average scores were between 1.0 and 1.6 indicating a highly successful and well-received tutorial. Six between lectures, workshops and slide seminars had more than 90% of ‘excellent’ scores. The percentage of ‘excellent’ scores for gynaecological and non-gynaecological cytology were 78% and 85% respectively.
These evaluations are exceptionally good and reflect the excellent scientific content and high quality of the EFCS tutorials. Most importantly, as many as 97% of the attendants wrote that they would recommend the tutorial to their colleagues. This will give us the motivation to go on.