Italy hosted the 32nd European Congress of Cytology , which is held in a different European Country every year, in 2006 under the EFCS ( European Federation of Cytology Societies) sponsorship. 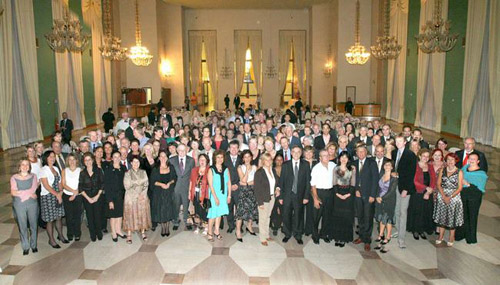 Gala Dinner in the Lido of Venice Casinò

SIAPEC-IAP (Italian Society of Pathology and Cytodiagnostics- Italian Division of International Academy of Pathology) jointly with the SICi (Italian Society of Cytology) and GISCI ( Italian Group for Cervical Cancer Screening) organized the event choosing the gourgeous city of Venice as an enviable frame for the Congress works which took place  from the 1st to the 4th of October.

It was a great honour to me to receive  the Congress Presidency, which needless to say, I accepted with some worries. My initial fears were unfounded, as we immediately had a large number of subscriptions, thanks also to the policy of keeping registration fees low, which allowed  young colleagues to join the event.

We had 751 participants, 621 attendees and 130 guests ( speakers and chairmen ), coming not only from all over Europe, but also from countries such as Australia, Canada, Iran, Japan, Korea, South Africa, Kuwait, Malaysia, Mexico, Saudi Arabia, Singapore, Thailand, Tanzania, Uruguay and United States.

Opening of the Congress, on the 1st of October, was not based too much on ceremony, after a brief welcome, all participants joined a cocktail that allowed to start a warm and friendly atmosphere.

The Congress works which started on the 2nd of October and went on till the 4th, took place at the same time in five different rooms. The two main ones hosted symposia which focused on the newest data and updates regarding breast, pulmonary, urinary, uterine cervix , thyroid and molecular cytopathology. All lectures and communications were always followed by interesting and lively discussions, to which all participants contributed with their qualified experience.

The same rooms hosted a symposium on cytology in developing countries, one on cytology education in the different european realities  and two meetings organized by the “Papanicolaou” Cytopathology Society and by the International Academy of Cytology jointly with the European Federation of Cytology Societies which enriched the Congress giving it a higher tone.

A symposium was entirely dedicated to and managed by cytotechnicians, important professional figures close to pathologists in daily routine.

The large number of  oral communications, for a total of 111, were given in the Pasinetti room; they involved young pathologists, who collected a high number of participants thanks to their enthusiasm and their skills.

To reward the high quality and scientific level of the oral communications, ten of them were moved into the relations session. Workshops and Slide Seminars, hosted in the Frau and Fellini rooms,were also widely appreciated for their practical implications. They represented an important meeting and comparison chance among expert pathologists on the most controversial and difficult diagnostic issues which may be commonly faced in daily routine.

Posters, for a total of 196, exposed in the exhibition area of the Congress venue, were of relevant scientific interest; the authors covered and discussed the scientific issues with the participants visiting them.

All the colleagues coming from so many and different parts of the world had the great opportunity to get to know each other better and better not only for the warm, friendly  atmosphere, and the gorgeous frame of the city of Venice, which saved beautiful sunny days for us; but also because of  the evening social events which gathered almost all of us.

The Concert at Scuola Grande di San Giovanni Evangelista, held on the 2nd of October raised big enthusiasm both for the talent of the members of the group “ Gli Interpreti Veneziani”  and for the architectural suggestion and beauty of the hall. The Official Congress Dinner, held on the 3rd of October  in the elegant salons of  The Palazzo del Casinò was attended by a lot of  participants, who joined the after dinner dancing in a friendly and lively atmosphere.

Prof. Matias Jimenéz-Ayala-IAC President “…on behalf of the IAC and personally, my congratulations for the high level got for your Congress, both scientific and socially…”

Prof. Volker Schneider-IAC General Secretary “… congratulations for a great Congress well organized and well attended. I had the impression the attendance rate has never been higher at a European Congress…”

Prof. Mercedes Santamaria– President of the Spanish Cytology Society “… I must also congratulate you on the Congress as a whole… I am sure everybody agrees it was a great success…”

Prof. Fernando Schmitt-President of the Portuguese Cytology Society “… Once more congratulations for the excellent congress that you organized. I hope that we can have a similar success in Lisbon in 2009”.

Dr. Mansour Mehzad- Isfahan Iran “… all things were well organized in your congress…the night of Concerts for violin and the Four seasons was one of my best night of life which I never forget…”

Many other congratulations messages came in; but I was particularly impressed by Philippe Vielh, former EFCS president and actual EFCS secretary, President of the 31st European Congress of Cytology held in Paris in 2005, who expressed all his thoughts with one word : “ BRAVISSIMO”.

This term is not referred only to my person, but to all the colleagues who firmly believed and  who wanted to work hard to make this Congress come true both from a Scientific point of view, which was really high level, and from the Organinzation side, which had to deal with many difficulties.

The Organizing Secretariat was really helpful, and so were the Sponsors, as without them it would have been quite difficult to manage such a wide range event.

The Congress also hosted different collateral scientific events such as the QUATE Meeting,  the IAC Members Council, the Advisory Board Meeting of Cytopathology Journal, the EFCS Assembly and the EACC Meeting.

During the Closing Ceremony, after a Magistral Lecture on Cytology Role in the 3rd Millennium, ten rewards of 1000 Euros each, were assigned to the best Oral Communications. At the end, I gave the warmest greetings and thanks to all the participants.

I am sure this Congress played an important role in highlighting the Italians’ passion for  Cytopathology, and I think it allowed to create firm connections with the European colleagues to start important scientific cooperations in the future.